Ribadesella is consider one of the best places in order to enjoy walking along  north of Spain. Due to the long coastline, from the beach to the end of the port , which is nowadays a comfortable ride without interruption. There are three main areas of rides next to the villa: The first one located close to the population center of the harbor promenade, starts in the Sella´s International Winners Walk, near  the winners monument, and followed by Princess of Asturias Street, recently remodeled. This is the busiest area of the way, due to fishing boats and the marina situated opposite. It passes by the Fish Market, a landmark building of rationalist architecture of the Second Republic, and continues by the Grua Walk, a long pier built between the eighteenth and nineteenth centuries , whose major elements are its long bench stone, literary Cay´s Fountaine and the Seawall. From here visitors can climb to the watchpoit from Guide´s Chapel, where guns of the battery that defended the harbor entrance are preserved. From there you can see one of the best views of the Cantabrian Sea .

On the Beach, its wonderful to stroll along the bridge enjoying Sella´s River, there are two very attractive places to walk in: one is Santa Marina´s Beach Walk, an area recently remodeled, clean and shiny as evidenced by his "Q" certificate, regarding Tourism Quality. Or a second one along the wide Arc of Beach to admire the modernist mansions located in front of the beach.

Those who want to have better perspective may ascend from the end of the beach, to the close lighthouse, which crowns the hill we the Beach is located. In the same area, although hidden, is situated Malecón´s Natural Park, a marsh of great ecological interest due to the migratory birds. There is a beautiful path for public use. 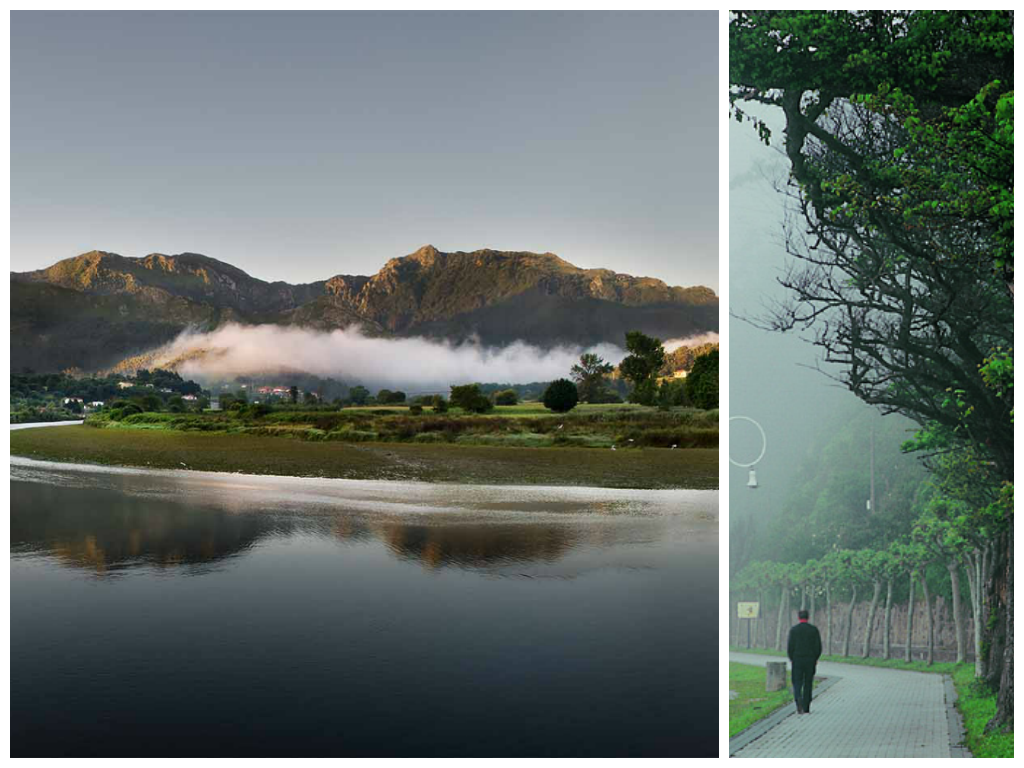 But Ribadesella´s possibilities do not end there for hikers, both sides of Sella´s estuary have a huge ride. On the right bank, following the route of the railway, you get to Oba´s Fields, a cool grove next to the river, famous for the picnic held there on Canoes pilgrimage. There is a railway bridge designed by Eiffel and rehabilitated after the Civil War. Walkers that want to continue along the right bank of the river, must cross Cueves Gateway the N -634 to the Gateway, a pedestrian bridge over the Sella which leads to Water Cueves village.

The left bank from Sella´s river has many attractions for the traveler, but should better be done by car, because it is a long route. Started by Tito Bustillo Cave and following Piconera´s Palace and Sardalla (with an excellent view) towards Tezangos. It is recommended to turn left from the tour to visit Santa María de Junco´s Romanesque church from the thirteenth century, located in a beautiful landscape . Going back to the main road continues towards theCueves Water´s  Village. It is also a must turn to the right and visit Noceu´s Romanesque´s ruins Church San Salvador de Moru. (From Moru is important to point out there is a beautiful road from here that leads to Ribadesella´s village Tresmonte by hills and pine trees, then lower Sources and exits Arriondas by Sinariega, beside the Sella´s river. As you can see ,the possibilities of this route are several).

Back to the original itinerary now and once again in Cueves road , the car appear to be engulfed by a maw of rock, for the road through the heart of the mountain by a natural cave, running alongside a stream, up to Water Cueves village. The cave is one of the most amazing natural wonders of the region. In Cueves Water begins Mills Road, and strictly pedestrian , whose attractive addition to the landscape, four traditional water mills.

The other major route from Ribadesella´s council, only for walkers and cyclists, is the Way of Sant James along the coast, or simply Camino de la Costa/ Coast Way. Its layout coincides roughly with what was for centuries the Camino Real/Royal , until late nineteent when different roads began to appear. It is the full path to cross from one end to Ribadesella´s council and see your wildest coastline, beaches and its capital, but to make and enjoy as it deserves is recommended to divide into several steps.