The council of Ribadesellas is located in a marvelous natural environment. Some of the most interesting areas are the beautiful river, some steep hills near the sea, some delight karst massifs cavers and the coast. Along the coast there are beaches, meadows, stoned areas and cliffs. The Sella river, is world famous  due to its Canoing competitions. It is consider the most legendary river of Asturias. Born in Ponton harbor, it flows along Cantabrian Mountains, and braves down into the valley crossing “Beyos” coomb, one of the most impressive and unknown places of the north of Spain. The Sella estuary empties into the Bay of Ribadesellas. Its two most spectacular tributaries are Cueves and Saint Michael from Ucio. Both flow into the Sella piercing the heart of the rock mass of the left bank. Cueves stream crosses a natural cave – through which runs also the road to the village. The second one is Saint Michel river, which starts in San Miguel de Ucio, runs inside the famous cave of Tito Bustillo and empties into the Sella near the villa 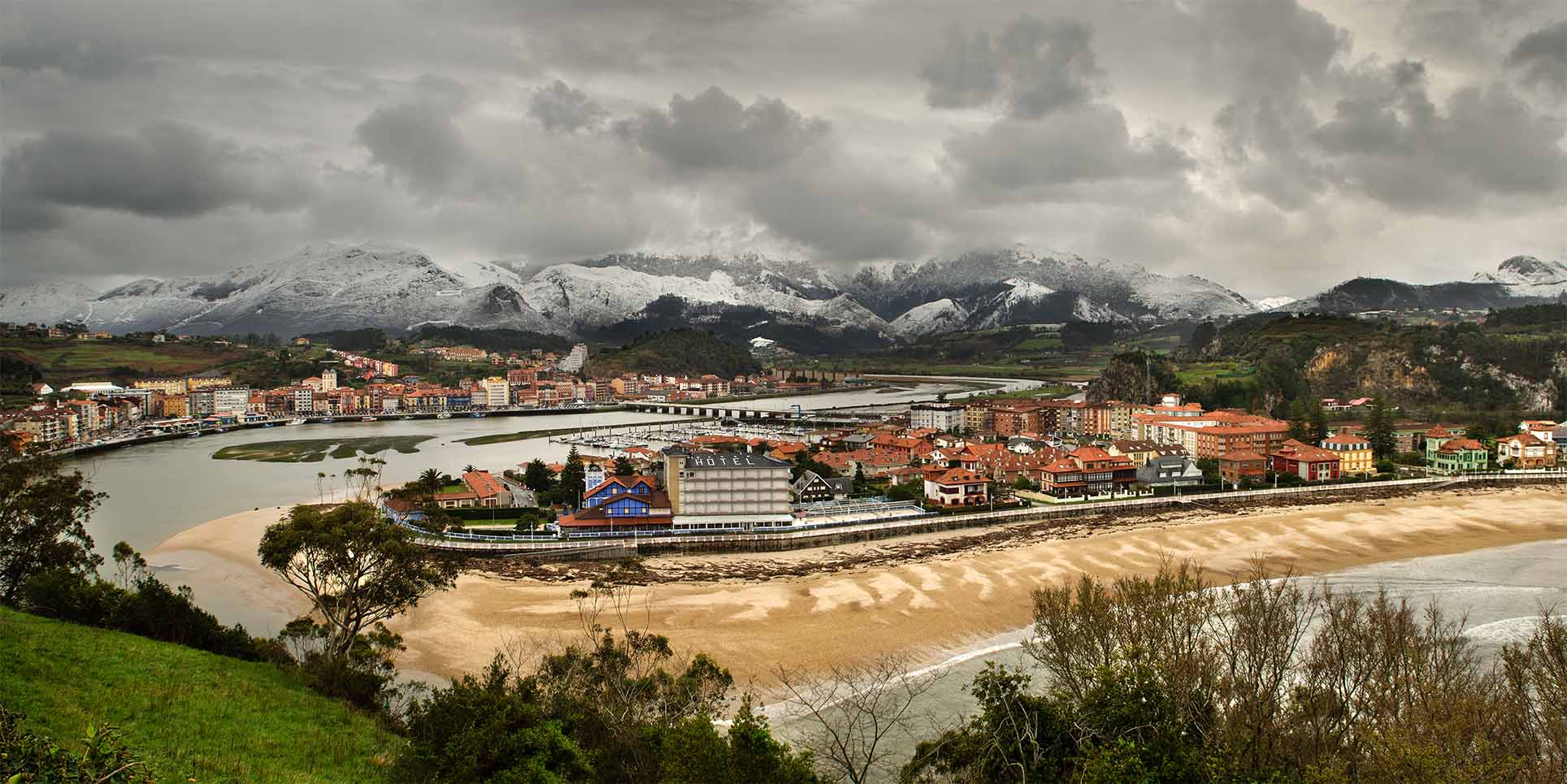 Lloviu is another interesting river of the council. It descends through the Sella Cave Tinganón the Guadamía (or Aguamía), and forms the border territories from Ribasedella and Llanes. Tower River, is another one. Actually formed by two different rivers that join in the village, called Acebo and Utrera. Guadamía  is very interesting in its final part, due to the beauty of the Cuerrs mills and Llames Beach. Acebo River, located in Tower, passes under a geological natural rock bridge called The Arcu. There is an old flour mill. Downstream, both attached streams go through the amazing coomb Entrepeñes, quartzitic needles. It ends in the dunes of Vega Beach. The Cerracín stream, in which there was a fulling mill in the early nineteenth century, marks the western line of the town and the border with Caravia.

Ribadesella´s council has significant  mountains, something rare due to the close location to the sea. The highest summit belongs to Sierra de Escape and it is called Mount Mofrechu of 897 m. It is situated near Santianes and the Sella River. From the summit you can see the estuary, the coast and Picos de Europa. The easiest way to access to Mount Mofrechu is from the south side, through the town of Igena. Other main mountains are Pagadín Peña, with a beautiful limestone nestled, with a mass of 419. m. Located between the villages of Calabrez, Pandu, and Sardeu Linares. And La Peruyalina located in Tresmonte, with a mass of 493m. To the West of the council reaches the Sierra  Sueve, where the viewpoint of the vertex Fitu-making four municipalities-and the tops of Gobia (539 m.) And Cross Llames with a mass of 554m., between both villages Ribasedella and Caravia.

The main beach of the council, and one of the best in the Cantabrian Bay is Santa Marina. It is situated along the mouth of the Sella and forms a wide shell flanked by two mountains, the Somos, where also the lighthouse is situated, as well as Corveru, which protects the harbor entrance. It is a large beach of fine golden sand, urban and equipped with all modern services, as credited since 2004 to nowadays by Q Quality. It is surrounded by mansions of the early twentieth century and has a newly renovated seafront, very beautiful to walk during the day or night. The other urban beach is the “Atalaya”or “WatchTower”,situated in a peaceful atmosphere were fans come not only for the magic of the place, but also because  the special suntan tone provides the particular rocks and Jurassic wanes.

The two non-urban beaches of the council are Vega (also extends Berbes ) and Cuerres, both located in each end of the council. Cuerres Beach , also called  Llames Beach, forms a small fjord in the mouth of the river Guadamía and just leaves the sand exposed at low tide. For that reason people use the surrounding green spaces for sunbathing. In the days of surge, with caution, you can see the columns of spray and hear the roar of the jesters. Vega Beach is situated on the west side of the town, it is free of developments and it is one of the few northern peninsular retaining its dune system. On the eastern area were discovered Jurassic remains. Near this Beach is located Entrepeñes coomb, a stunning formation of Ordovician quartzite origin needles. Both, beach and coomb have been declared Natural Monument of Asturias. Other important coomb is Arra, a beautiful creek opposite the village of Collera, which was descending a stairway on the cliff. USBA and Tereñes are also very interesting, both nestled in a hollow of the coast and framed between green and vast meadows .

The municipality from Ribadesella, whose soil is largely of Carboniferous origin, is very rich in limestone and therefore in karst or dissolutive activity, producing caves and cavities within the rock mass. The caves have been involved in local life both in prehistory, which were occupied by a large colony, as today used in research and as a main tourist and cultural resources. Located on the right bank of the Sellaare located San Antonio caves, but the most important are concentrated on the left bank. Most of them have their entry in the " sinkholes " , blind valleys formed by the erosive action of karst. Sella is farthest from the Cave Rose, a geological wonder located in Sardeu sinkhole. It was declared Partial Nature Reserve because it contains a large colony of endangered insects. The acces is vetoed to the public and also its cultural tourism and caving use. Also in the left side is located Boquera cave, crossed by a river and the road leading to the village of Cueves and Pedroses Les Caves , El Carmen  El Cierru in Fresnu, both occupied  in prehistoric era.

Apart from those  caves, the most important are situated in Ardines massif, along Sella´s river. It is a system of interconnected galleries, originating sinks Ardines sinkholes and some passages and blinded areas by landslides or cataclysms. The main caves of this network are Tennis, which is the highest and faces the Sella river by a natural viewpoint, the Lloseta , which is just above Tito Bustillo and communicated by a fireplace, and Cuevona, immense geological dome illuminated by a spectacular overhead opening. To sum up the is most important one, the Cave of Tito Bustillo, one of the world treasures of the Paleolithic, which is an astounding array of galleries, rooms, panels, stalactites and stalagmites, and margin of prehistoric value, worth a leisurely visit . The cave is traversed throughout its length by San Miguel River, which flows into the Sella really present gateway to the cave.